I am a viral immunologist by training. My research has focused on cytoplasmic mechanisms that detect and inactivate viruses shortly after their entry to the cell. From 2009 to 2017 I worked in the lab of Dr Leo James at the MRC Laboratory of Molecular Biology in Cambridge, UK, where I co-discovered and characterised the novel antibody receptor TRIM21 as a potent antiviral sensor. In recent years I have been asking whether intracellular antibodies can be used to specifically degrade cellular proteins. This has led me into the field of protein misfolding. I am fascinated in the parallels between templated protein misfolding and viral infection and the shared mechanisms that may limit their spread.

I have been interested in neurodegeneration from my MSc, and following on from myPhD, I knew that I wanted to focus my career on understanding the mechanisms of neurodegeneration. I carried out my PhD at the Babraham Institute, where I worked on the interaction between GIMAP6, a member of a family of small GTPases that play a role in maintaining lymphocyte populations, and GABARAPL2, an Atg8 homologue. This gave me an insight into autophagy and aspects of cell biology and equipped me for work in the Seaman group, which is based in the Cambridge Institute for Medical Research. Here I was given the opportunity to work on analysing the role endosome-to-Golgi trafficking plays in the trafficking and processing of the amyloid precursor protein and I have identified an important role for PLD3 in this process. Following on from this project, I was keen to broaden my knowledge of neurodegeneration further, and to this end, my project in the McEwan lab will focus on investigating the mechanisms via which TRIM21 can degrade antibody-bound aggregates in animal models of disease with the aim of uncovering the implications this has for various neurodegenerative disorders.

As part of my BSc in Biological Sciences at Durham University, I undertook a placement year at MRC Technology (now LifeArc) at their Centre for Therapeutics Discovery. This provided an excellent experience in Drug Discovery where I worked on projects related to neurological disorders. Following my graduation from Durham in Summer 2017, I began working at the Alzheimer’s Research UK Drug Discovery Institute at Cambridge University. Generally, the aim of the institute was to identify therapeutics that modulate proteostasis, and typically protein degradation. This developed my experience in drug discovery and began my interest in protein degradation. I started my PhD in the McEwan lab in April 2019, where I am researching mechanisms of tau degradation by the ubiquitin proteasome system, funded by an Alzheimer’s Research UK studentship.

I completed my BSc in Biochemistry and Cell Biology at Jacobs University Bremen but did my final project in Immunology in the group of Prof. Dr. Sebastian Springer. My project was to uncover whether or not the dimerization of the murine cytomegalovirus immunoevasin gp40 is important for its function in immune evasion and so gain a better understanding of the interactions which take place between viruses and their hosts. I joined the McEwan lab because of my desire to apply immunological concepts in other seemingly unrelated fields. Throughout my time here I will be looking at TRIM21 mediated degradation of misfolded protein species implicated in neurodegeneration and exploring ways to exploit this pathway as a potential therapeutic. I will further developing TRIM21-based broadly-applicable methods of knocking down gene products at the protein level. 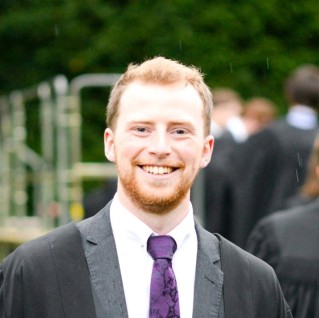 During my Biomedical Sciences BSc at the University of York I undertook a year in industry within the antibody discovery group at UCB Celltech.  Whilst on this placement, I developed a particular interest in the molecular pathology of neurodegenerative diseases and how these pathways could be targeted by antibody-based therapies. This led me to the McEwan lab and my PhD project. I will be focusing on creating constructs using TRIM proteins to selectively degrade cytosolic proteins implicated in neurodegenerative diseases.

I worked with Will in the summer of 2018 after hearing him speak at the UCL Virtual Virology Seminar Series, finding the crossover between dementia and innate immunity fascinating. After a fabulous ten weeks Wellcome Biomedical Vacation Scholarship working on TRIM21, I decided to specialise in BSc Immunology and Infection for my final year at UCL. During that time, I worked in Prof Greg Towers Lab with Dr Becky Sumner, conducting screens of small-molecule inhibitors with the aim of targeting components of innate immune DNA sensing pathways – these pathways being crucial for detecting foreign viral DNA and inducing an antiviral state, through the production of the ‘warning’ molecule, Interferon. I am extremely excited to have returned to the McEwan lab to work on the relationship between Interferon and neurodegeneration. I am collaborating with Dr Sam Wilson at the Centre for Virus Research in Glasgow and funded by the Alzheimer’s Society.

I recently completed my BSc Medical Sciences specialising in Neuroscience at the University of Exeter. As part of this course, I undertook a 12-month placement at the UK DRI, Cambridge working on a collaborative project between the McEwan and Klenerman groups. During this project, I investigated the aggregation of different tau isoforms. To further pursue my interest in neurodegeneration, I have now returned to the McEwan lab as a Research Assistant, where I will be investigating the role of co-factors in tau aggregation.

In 2017, I graduated from the University of Warwick with a BSc in Biomedical Science. My final year project biochemically characterised a novel tau mutation, S356T identified in patients with FTD. Intrigued by the complexity of the human brain, I applied for the interdisciplinary MSc Neuroscience programme as part of the Graduate School of Systemic Neurosciences at the Ludwig-Maximilians-Universität, Munich. During this two-year MSc, I worked in the lab of Dr Irina Dudanova investigating the mechanism of action of a neuroprotective growth factor in cell culture models of Huntington’s disease. My passion for the clinical and patient-focused aspects of medical science led me to work as an Analyst for Costello Medical Consulting, Cambridge for 18-months, where I worked on a range of projects to support the healthcare and pharmaceutical sector. Whilst fascinating to gain insight into the later stages of novel therapy development, I am very excited to return to the bench as part of Will’s group, where I am working on antibody entry in neurons in relation to antibody-TRIM21 mediated degradation of misfolded proteins, in particular tau.

I completed my BSc. in Physiology at McGill University in Montréal, QC before moving to London for my MSc. In Neuroscience at UCL. From there, I joined Michel Goedert’s lab at the MRC Laboratory of Molecular Biology in Cambridge, where I worked largely on mouse models of Aβ and tau pathologies. I am excited to be joining the McEwan lab for my PhD, where I will be studying the role of C-terminal phosphorylation in the assembly and seeded aggregation of tau filaments.